Meet Brooke & Jubal!
They are taking over mornings on B102-9 each weekday from 6am – 10am!
Brooke & Jubal will keep you laughing and entertained all morning long with their Phone Taps, Shock Collar Questions, Second Date, and SO MUCH MORE! 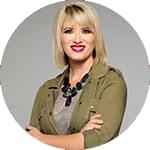 A self described small town girl living the big city dream, Brooke Fox has worked in morning radio for the past 13 years.  Brooke was a host on FOX TV’s “Dish Nation” for three seasons. She also serves as a spokesperson for the American Heart Association and the Komen Foundation.

Jubal Flagg is a standup comedian, radio host, television personality and comedy writer. Known for his quick wit, and keen and often strange observations, Jubal has been entertaining audiences on stage and on the radio for more than 10 years.

What You Missed with Brooke & Jubal

There is no custom code to display.