Every Month, Shamus and Annie will feature a Mutt of the Month from the Loving Heart Animal Shelter! To adopt today call (765)413-0521 or visit them online: lovingheartanimalshelter.org.

Mutt of the Month: Yoshi 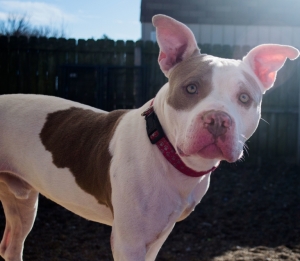 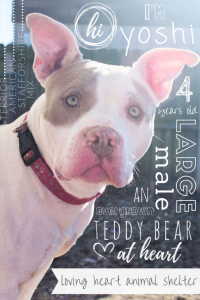 What’s in a name? The green dinosaur avatar in Super Mario Brothers, apparently! Much like his namesake, Yoshi is always up for going on an adventure or just hanging out with his pals. Yoshi’s a pretty cool dog who loves everybody, so it’s hard to believe that the game almost ended for him.

Yoshi was rescued from a high-kill animal control facility in Indianapolis. At Animal Control, he passed the temperament test and went to the adoption floor; but, because he wasn’t showing well due to kennel stress, he was made “rescue only.” Yoshi quickly came to stay with us.

If you come to meet Yoshi, you need to excuse his kennel behavior – the kennel shows Yoshi in the worst light. Outside the kennel, Yoshi loves people. He’s a very handsome boy who loves his treats – already, he knows sit and shake and will probably catch onto new cues pretty quickly. In addition to treats, Yoshi loves giving kisses and getting belly rubs.

Yoshi does well with dogs but can be forward when meeting them, so we recommend a meet-and-greet if you have another dog in your home. We don’t know how Yoshi would do with cats.

Yoshi has been neutered and vaccinated. His adoption fee is $150. He’s around four-years-old and is an American Bulldog mix.

If you have any questions about Yoshi or are interested in pursuing adoption, visit Loving Heart Animal Shelter at 512 Veterans Memorial Pkwy East, Lafayette or apply online at lovingheartanimalshelter.org

There is no custom code to display.